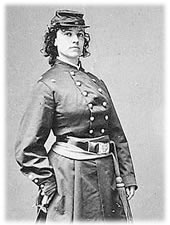 Pauline Cushman was born Harriet Wood in 1833. Raised in Grand Rapids, Michigan, at the age of eighteen she made her way to New Orleans, Louisiana to become an actress with a traveling theater group. Years later, in New York City, Harriet began using the name Pauline Cushman as a stage name.

Shortly after the Civil War began, Pauline was in Confederate held Louisville, Kentucky when the theater for which she worked fired her. She immediately reported to Union commanders with a request to become a spy. Her beauty and fame as an actress allowed her to move freely among Confederate commanders and acquire their battle plans. It was agreed upon by the Union commanders and she returned to Louisville. It is not known how much data was ever acquired however it is known that she was captured by Confederates and sentenced to hang. The hanging would never take place and the war would end shortly after her sentencing.

After the war Pauline spent a brief time being featured by P.T Barnum in New York. In the years to follow she traveled to San Francisco where she settled as a seamstress. She would receive a pension for her service during the war and was buried with honors in the National Cemetery in San Francisco.